Timothy R. Larsen is Executive Vice President at Policy Impact. As a career officer in the U.S. Marine Corps, he attained the rank of Major General. His background and unique experience include a comprehensive understanding of the Department of Defense, operational and strategic planning, and complex joint, combined, and multi-national military operations. He has extensive experience at the tactical, operational, and strategic levels of planning and execution. He has held command and staff positions in multiple domains, including service headquarters, combatant commands, and multinational organizations. Larsen’s rich operational background enhances his extensive experience in the Washington, D.C. interagency arena.

Following active duty, Larsen accepted a Senior Executive Service (SES) position as the Director of Marine Corps Community Services (MCCS). In that role, he provided oversight and national-level policy guidance for over 80 programs across the Quality of Life spectrum for more than 200,000 Marines and 400,000 dependent family members. His responsibilities included all activities from retail to Marine and Family Support programs. He had fiduciary responsibility for more than $1 billion annually in non-appropriated funds generated through the Marine Corps Exchanges system and other MWR programs and over $400 million in appropriated funds budgeted for Marine and Family Support programs. He served as a member of the Board of Directors for MCCS and the Department of the Navy’s Fisher House Foundation and served on the Department of Defense Education Activity (DoDEA) Dependent Education Council (DEC).

Larsen brings extensive international experience in Asia and the Middle East with government, military, and diplomatic entities. He has worked with the U.S. Embassies in Japan, Korea, Kuwait, Saudi Arabia, Egypt, Kenya, and Sudan. As Chairman of the U.S.-Japan Joint Committee, he worked on all issues involving the forward basing and stationing of U.S. Forces in Japan and Okinawa with the relevant ministries and agencies of the government of Japan. He was also the senior U.S. military representative assigned to the Defense Policy Review Initiative (DPRI). The DPRI was tasked to develop and negotiate a series of bi-lateral international agreements with Japan to ensure U.S.-Japan mutual defense, continue regional security, and realign the basing requirements for U.S. forces forward based and stationed in Japan, Okinawa, and Guam. He served as the Exercise Director and White Cell Commander for the U.S.-Korean combined exercise program for over 10 major exercises. He was a Research Fellow at the National Institute for Defense Studies in Tokyo, Japan. He was awarded the Order of the Rising Sun by the Emperor of Japan for his work in strengthening the U.S.-Japan security alliance.

Larsen holds a M.A. in international relations from Salve Regina University in Newport, Rhode Island, and a second M.A. in national security strategic studies from the Naval War College. 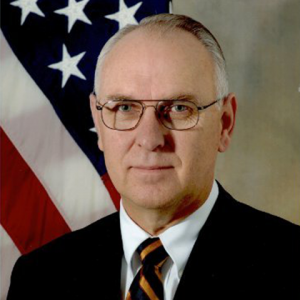