As a student activist at the time, Ahmad was jailed for his participation in the 1999 student demonstrations at the University of Tehran. At the height of the protests, a photograph of Batebi made its way onto the cover of The Economist magazine.

As a result of the magazine cover, Ahmad was arrested by Iranian security forces and sentenced to death by a revolutionary court. The resulting outcry from Iranian and international human rights groups prompted the sentence being commuted to 15 years imprisonment. Batebi, who spent nine and a half years in prison, took advantage of a temporarily medical furlough to escape the country. Since then, he has co-founded the Association of Human Rights Activists in Iran and worked as a journalist, writer, and producer of Iran-related news for Voice of America’s Persian-language service for several years. After his work with Voice of America, Ahmad continued to work as an independent journalist and also founded the online radio station Radio JiBi. Ahmad has also worked with The Washington Institute for Near East Policy, Radio Free Europe / Radio Liberty Persian-language service and other media as a website manager and developer, journalist, photographer, media producer and ​master of science in information assurance​. 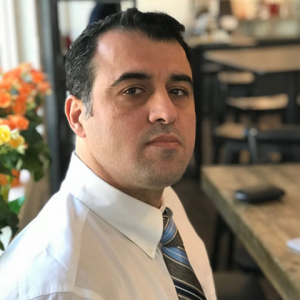